CHICAGO -- Starbucks Coffee Co. opened its doors to its Starbucks Reserve Roastery Chicago on Nov. 15. Located on North Michigan Ave. and Erie St. on Chicago's Magnificent Mile, the opening of Chicago Reserve Roastery marks Starbucks sixth global Roastery and third location in the U.S. Starbucks largest-ever immersive coffee experience - across five floors and 35,000 square feet of retail space - celebrates the company's heritage and is a tribute to the roasting and the craft of coffee. GRAND OPENING: L... 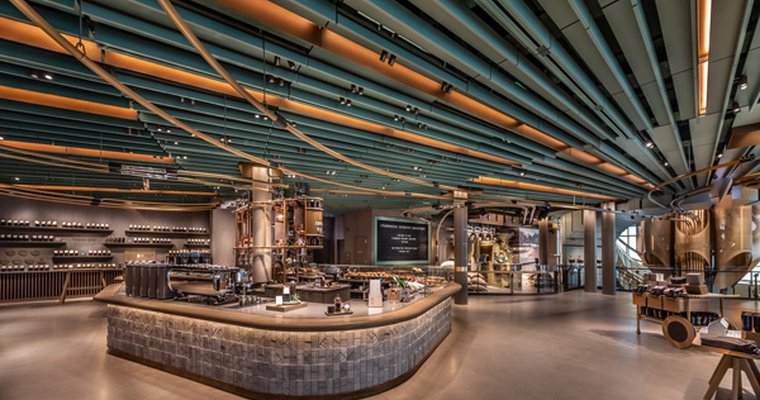 CHICAGO -- Starbucks Coffee Co. opened its doors to its Starbucks Reserve Roastery Chicago on Nov. 15. Located on North Michigan Ave. and Erie St. on Chicago's Magnificent Mile, the opening of Chicago Reserve Roastery marks Starbucks sixth global Roastery and third location in the U.S. Starbucks largest-ever immersive coffee experience - across five floors and 35,000 square feet of retail space - celebrates the company's heritage and is a tribute to the roasting and the craft of coffee. 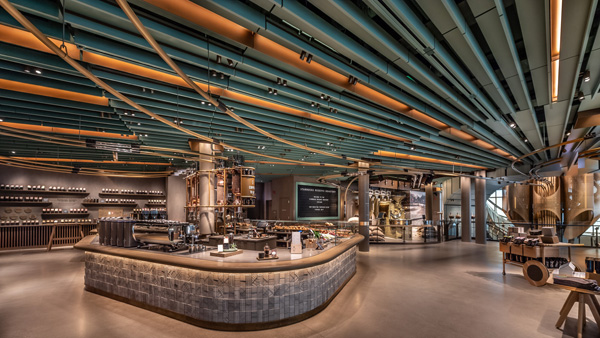 Visitors will be able to see, hear and learn about coffee's extraordinary journey through intentional and unparalleled design, while enjoying a menu featuring exclusive coffee beverages exclusive to this location. The Chicago Roastery joins locations in Seattle, Shanghai, Milan, New York and Tokyo.

"Over the past five years, we have created the ultimate immersive experience around all-things-coffee in spectacular Starbucks Reserve Roasteries in flagship cities around the world. This week we are delighted to open our doors on the sixth global Roastery in an iconic building located on Chicago's renowned Magnificent Mile," said Starbucks chief executive Kevin Johnson. "These Roasteries amplify the Starbucks brand, serve as innovation hubs, and create experiences for millions of customers around the world."

Starbucks has a rich history with the Windy City, dating back to 1987 when the company opened its first store outside of the Pacific Northwest and had a total of 11 retail stores and served as the foundation for the company's national growth strategy. Nearly 32 years later, there are 796 company-operated stores in the region where Starbucks employs more than 18,100 partners (employees). The Roastery employs nearly 200 people, including roasters, baristas, commessas, bakers, and mixologists.

"The design of the Chicago Roastery was inspired by the iconic Chicago landmark, and the city itself," said Jill Enomoto, vice-president of Roastery Design and Concept for Starbucks. "We embraced the building's natural light, married it with shades of classic Starbucks greens and intentionally wove in design features to encourage customer exploration and highlight the love and respect we have for coffee."

Starbucks Reserve Coffee Bar: Upon entering the Roastery, visitors can visit the Reserve coffee bar on the main level, where baristas are crafting classic espresso beverages such as cappuccino, latte and cortado.

Experiential Coffee Bar: The third floor is home to the Experiential coffee bar which provides customers the opportunity to immerse in the art, science and theatre of coffee. It features elevated brew methods and pairings, as well as specialty Roastery creations and brew comparison flights.

Barrel-Aged Coffee Bar: The barrel-aged coffee bar is found on the fourth floor and showcases a variety of spirit-free coffee beverages whose beans have been carefully aged in barrels. Here, visitors can explore a menu of cocktail-inspired coffee creations exclusive to the Chicago Roastery, including the Smoked Cold Fashioned (a lightly sweetened whiskey barrel-aged cold brew with aromatic bitters, smoked tableside), Minted Cold Brew (whiskey barrel-aged cold brew, shaken with mint syrup and served over pebble ice) and more.

The Chicago Roastery will feature a dedicated Arriviamo Bar, like the Starbucks Reserve Roastery locations in New York and Milan. Inspired by the Italian tradition of apertivo, the Arriviamo Bar will be a destination for customers looking for a carefully crafted cocktail. Located on the fourth floor, the Arriviamo bar features an assortment of traditional and unique cocktails, all concepted by local mixologists Julia Momose, Annie Beebe-Tron and Rachel Miller. In addition to a menu of classic cocktails and a selection of local Chicago beer and wine, exclusive specialty cocktails featuring Starbucks Reserve coffee and tea that nod to the culture and traditions of Chicago include:

Roastery Boilermaker: A Chicago riff on the classic beer and a shot, this cocktail is inspired by a Stiegl Radler and includes Starbucks Reserve Cold Brew, Koval Four Grain Whiskey, local favorite Malort, grapefruit bitters and a sidecar of Rhine Hall Bierschnapps.

In addition to coffee beverages, Roastery visitors can enjoy food at Princi, the renowned artisanal boutique bakery and cafe founded by Italian baker Rocco Princi. As the exclusive food purveyor at Starbucks Reserve locations, Princi offers onsite baking of fresh breads, cornetti and focaccia, pizza and salads, plus cakes and tarts. A full menu of items will be available on the second floor Princi bakery, while select items will also be available throughout the Roastery for customers looking to pair their coffee with a savory or sweet bite.

Exclusive to the Chicago Roastery will be a bakery conveyor that has been designed by Starbucks to transport fresh baked goods from the Princi bakery on the second floor, to the Starbucks Reserve Coffee Bar on the main level.

In a nod to the city's vibrant history, artwork from local Chicago artists that tell stories and encourage customers to explore can be found throughout the building's five floors. Customers can also purchase limited-edition merchandise from Chicago-based visual artist Mac Blackout to take home with them.